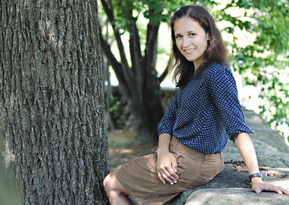 Cassandra Godzik brings a diverse background as a nurse and psychiatric nurse practitioner to her position as an assistant professor in the nursing program, having worked in a variety of areas — including adolescent and adult programs in both outpatient and residential settings.

In addition to her role at Regis College, she is also working toward completing her Ph.D. at the University of Massachusetts Medical Center, where her research is focused on sleep disturbance and mental health among geriatric populations.

Cassandra earned her BS and MS in Nursing, with a specialty in Psychiatric Mental Health Nursing, from Regis College. During her time at Regis, she also worked as an RN in the adolescent personality disorder and adult female eating disorder units at McLean Hospital. She is a psychiatric nurse practitioner working as a nurse manager/clinical educator at McLean. In this role, she assists people with psychiatric diagnoses in inpatient and residential settings.

Prior to going into the nursing profession, Cassandra earned her BS in Neuroscience and Psychology from the University of Vermont, where she wrote her honors thesis on depression and anxiety research in the emerging adult population.