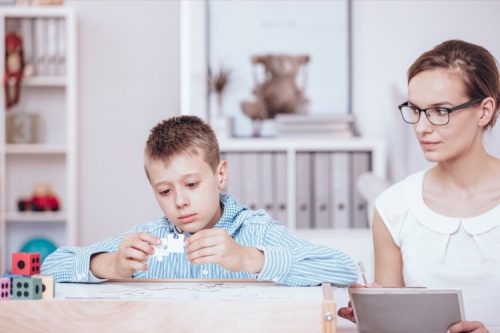 Autism Spectrum Disorder (ASD) is defined by the American Psychiatric Foundation as “a complex developmental condition that involves persistent challenges in social interaction, speech and nonverbal communication, and restricted/repetitive behaviors.” There is a wide range of effects and severity of symptoms experienced by people who are diagnosed with ASD.

The U.S. Centers for Disease Control and Prevention estimates that autism spectrum disorders are present in 1 in 59 children. ASD is about four times as prevalent in boys than in girls, with 1 in 37 boys diagnosed as having ASD, compared to 1 in 151 girls.

The most popular treatment for children with autism spectrum disorder is applied behavior analysis (ABA), which the Association for Science in Autism Treatment describes as the use of interventions to improve “socially important behavior.” Behavior analytic interventions are based on learning theory and methods that have been studied scientifically and shown to be effective in improving the lives of people with autism spectrum disorders.

The antecedent-behavior-consequence (ABC) method of assessing functional behavior can be combined with an intervention such as task analysis as the basis for effective interventions in children with autism spectrum disorder. These types of assessments and interventions work to “increase appropriate skills and decreas[e] maladaptive behaviors,” as Psych Central reports. The goal of a task analysis is to break down and simplify complex tasks in order to provide step-by-step guidance on how to complete specific behaviors. This guide describes several specific task analysis techniques and presents examples of their application in diverse settings.

What Is Task Analysis?

The National Professional Development Center on Autism Spectrum Disorders defines task analysis as a teaching process that breaks down complex activities into a series of simple steps that students are able to learn more easily. Researchers have shown that task analysis meets the criteria for evidence-based practice by improving adoption of “appropriate behaviors and communication skills” by children in preschool, elementary school, and middle school.

However, a simple definition of what task analysis is doesn’t explain why the approach has become so important in educating children with ASD. Three characteristics are vital to the success of task analysis as a teaching method:

The task analysis technique of chaining has two primary components, as ThoughtCo. explains:

Other effective task analysis techniques include these two approaches:

What Is the Purpose of Task Analysis?

The Autism Classroom describes task analysis as both “unexciting” and “critical to systematic instruction.” The advantages of task analysis over other ABA approaches are explained by Autism Speaks:

When preparing an ABA program for a student, applied behavior analysts begin by assessing the student’s skills, as well as the goals and preferences of the student and the student’s family. Age appropriate skills evaluated in the initial assessment serve as the foundation for the student’s specific treatment goals. These skills include the following:

The primary use of task analysis in ABA settings is to teach activities for daily living (ADLs), as Total Spectrum explains. ADLs are actions that most people complete on a daily basis, such as setting a table for dinner or purchasing an item and asking for change. For people with autism spectrum disorder, however, these skills are especially important as  these types of activities serve as the foundation for their independence.

Individuals with autism spectrum disorder gain a better understanding of basic living skills by focusing on the mastery of individual steps in a complex process. Task analysis can be applied to any process that can be broken into multiple steps. Once the steps have been identified and the directions created, instructors devise a learning plan that is customized to the needs and goals of the student. The instruction often relies heavily on visual support tools, such as cards, small replicas of objects, or the objects themselves.

In addition to helping the student with autism spectrum disorder, task analysis can improve the quality of life for all family members. Strong skills in communication, interpersonal relations, and social interactions help enable people with ASD to lead successful, independent lives. Autism Speaks outlines the purpose of task analysis and the many ways task analysis and other ABA approaches benefit individuals with ASD, their families, and their communities:

Teeth brushing is a daily routine for dental hygiene that most adults perform with little conscious thought, but it is an example of an activity that can be challenging for children with autism spectrum disorder. Behavioral Health Works describes the task analysis for brushing teeth. The teaching begins by reinforcing the reason for the activity: to have clean, healthy teeth.

The next steps may seem intuitive to adults, but the process can be formidable for children who have never brushed their teeth themselves and may fear the sensory components of teeth brushing or making a mistake. By dividing the task into a sequence of discrete actions, children are more confident that they can perform each subtask correctly. Task analysis has been shown to teach these types of skills much more quickly than alternative instruction methods.

Few adults would guess that the relatively simple act of brushing one’s teeth is comprised of at least 18 separate operations:

By breaking down the task into smaller activities, students are less likely to feel overwhelmed by the overall objective. However, students with ASD will likely need to master one or two of the steps at a time and then link the separate activities using either forward chaining or backward chaining, as ThoughtCo. describes:

One of the simplest and most effective ways to prevent illness — in oneself and in others — is by washing one’s hands. The CDC recommends that people wash their hands frequently each day:

However, the task analysis for washing hands breaks down the process into several more discrete steps, as the New Behavioral Network describes:

As with the task analysis for teeth brushing, breaking down the complexities of such basic hygiene tasks into smaller pieces helps individuals with autism spectrum disorder to build a chain of learning that completes the overall task when the separate steps are linked together. The forward and backward chaining taught as part of these exercises can be transferred to other social and employment situations.

A Look at Other Task Analysis Examples

The range of applications for task analysis in ABA therapy is limited only by the imagination of teachers and the needs of students.

Preparing for a Satisfying Career in ABA Therapy

Task analysis and other ABA techniques are part of a comprehensive evidence-based practice that teaches students with autism spectrum disorder the life skills they will need to live independently. Visual presentation approaches and breaking down complex tasks into a series of simple steps are keys to helping children with ASD process information quickly and simply.

Graduate programs such as Regis College’s online Master of Science in Applied Behavior Analysis prepare students who are starting their careers or looking to advance in their field. Among the career options available to MS-ABA graduates are ABA training coordinator, clinical supervisor, and clinical director. Graduates often work at outpatient care centers or government agencies, or in private practice.

Discover more about how Regis College’s online Master of Science in Applied Behavior Analysis degree program helps address the growing need for health professionals trained in task analysis and other ABA methods that help students with autism learn the skills they will need to lead independent lives.

What Is Autism Spectrum Disorder and What Should Parents and Educators Know?

Exploring ABA Techniques and Their Role in Treatment

Accessible ABA, “Use Chaining and Task Analysis to Help Your Child with Autism”

Autism Classroom, “What You Need to Know About Task Analysis and Why You Should Use It”

The Autism Community in Action, “Developing Lifeskills: How to Teach a Skill”

Autism Grown Up, “Task Analysis as an Evidence-Based Practice”

Behavioral Health Works, “Using a Task Analysis to Teach a Child to Brush Their Teeth”

ThinkPsych, Task Analysis for Getting Dressed and Hygiene

U.S. Centers for Disease Control and Prevention, When and How to Wash Your Hands

Learn More about our Online MSABA