How Many Nurses Are in the U.S.? 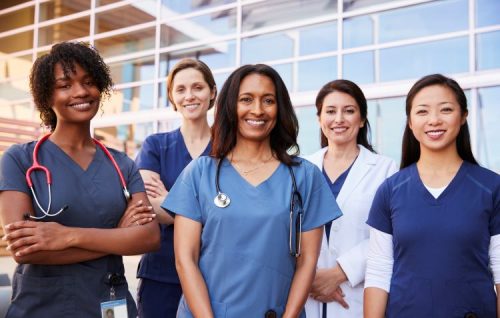 Nursing is one of the most important professions in the health care industry. It’s also a job that’s facing a shortage of qualified candidates. For students pursuing a career in advanced nursing, this projected dearth translates to significant opportunities. Earning an advanced degree, such as an online Master of Science in Nursing (MSN), can prepare students to pursue these opportunities to the fullest extent of their abilities.

The Nursing Shortage by the Numbers

How many nurses are in the U.S.? Statistics suggest not enough, which could be problematic down the road. According to a 2017 report published by the Health Resources and Services Administration (HRSA) there will be a need for nearly 800,000 additional registered nurses (RNs) by 2030. Furthermore, a 2018 report from the American Nurses Association (ANA) predicts more registered nurse openings through 2022 than in any other profession in the United States. ANA’s numbers correlate with data from the BLS, which projects 15% job growth for registered nurses between 2016 and 2026. The forecast growth is even greater for advanced practice registered nurses (APRNs) such as nurse practitioners; the BLS projects 31% growth in this job category between 2016 and 2026, compared with only 7% for all occupations.

Several factors contribute to the nursing shortage. Arguably the most prominent is the aging population; there are more people aged 65 and older than at any other time in the country’s history. This number is poised to increase significantly over the next decade. According to the Population Reference Bureau (PRB), projections indicate that, by the time the latter half of the baby boom generation hits retirement age in 2029, just over 71 million Americans will be 65 and older — which translates to approximately one in every five Americans. This aging population correlates with people living longer and hence the increased need for health care services.

The expected wave of retirement also directly affects the nursing industry itself. Projections indicate that roughly one-third of the current nursing workforce will hit retirement age by 2031. This would leave a shortfall of about 1 million nurses, but it also connects to a potentially greater issue relating to nurse training. While there may be a greater need to fill these positions as they become available, there may also be an increased lack of qualified nurses to deploy the resources and training necessary to ensure the delivery of high-quality care that can improve patient outcomes. Because of this, it’s become crucial for advanced practice nurses to carefully hone the skills and competencies that can allow them to flourish as trusted leaders in the industry.

Studies indicate that states with large population centers tend to have the highest levels of employment in the health care industry. California tops this list, followed by New York, Texas, and Florida. At the same time, states in the South and Northeast have the highest concentration of jobs in the industry, a metric led by Tennessee, Mississippi, Maine, and Massachusetts. As nurses retire from their positions, this could translate to a greater uptick in opportunities in these states than elsewhere.

Studies show that most of these positions may be offered in physician offices. These reports also project a number of potentially available roles in a hospital and outpatient care environment, although there may a lower number of hospitals to work at compared with outpatient care clinics.

Attaining an advanced nursing degree, such as an MSN, can open students up to a greater number of higher-level roles linked to the industry’s projected shortage. The skills and competencies nurtured throughout an MSN program can also prepare students to lead others through the industry’s constant changes, from new insurance laws to innovative technological advances.

Advanced nursing roles tend to offer more generous financial benefits. For instance, according to the BLS, the 2017 annual median pay for a nurse practitioner was $110,930. The annual median pay for a non-advanced role, such as a registered nurse, was $70,000.
Ultimately, the biggest benefit to pursuing an advanced nursing degree is that it gives aspiring nurses a greater chance to be agents of positive change in health care. Having the ability to oversee the industry’s intricacies from a high-level nursing position can have a profound effect on how health care is delivered, an element that can have a directly positive impact on patients’ lives. Learn how Regis College’s online Master of Science in Nursing can help sharpen the skills needed to make this impact.