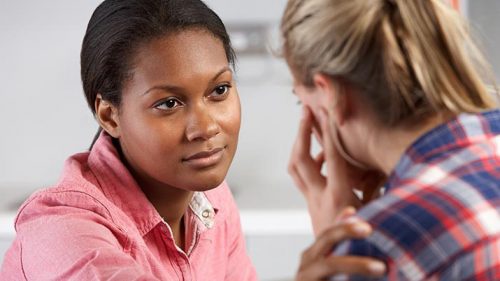 Psychiatric nurses work alongside other mental health professionals, such as psychiatrists, to help patients deal with psychiatric disorders. The extent of their role often involves providing treatment and planning care for patients that may have both acute and chronic mental health conditions; such as psychosomatic disorders, sexual disorders, substance abuse issues, personality disorders, and other specific mental disorders such as depression or anxiety. Completion of a DNP program, when combined with two years of practice as a registered nurse and a minimum of 500 supervised hours of clinical practice in an appropriate mental health setting, prepares nurses for certification through the ANCC psychiatric mental health nursing board. This can open the door to career independence in the following fields of advanced psychiatric nursing. [16]

Many communities are afflicted with substance abuse problems that require intervention by trained psychiatric nurses. These interventions rely on rehabilitation programs that combine physical care for potential symptoms of withdrawal or other drug related physical conditions, with mental counseling that targets the identification of potential causes for a patient’s substance abuse. This approach uses evidence-based tactics to eliminate or control substance abuse habits, while educating patients on the dangers of continued substance abuse. At the advanced level, DNP psychiatric nurse practitioners can work as directors of community mental health initiatives, acting to prevent the spread of substance abuse habits by consulting with local health agencies, schools, law enforcement agencies, and concerned members of the community. Psychiatric nursing provides extensive knowledge of addiction patterns and how to combat drug abuse and addiction, providing nurses with the skills needed to work with patients across the entire lifespan, in all health care environments, but especially in urban drug treatment centers, psychiatric facilities, rehabilitation centers, such as methadone clinics, and hospitals.

Convicted criminals are granted a constitutional right to mental health treatment, and psychiatric nurses are employed by prisons and other correctional institutions to provide care to patients who are especially vulnerable due to their incarceration. This increased vulnerability is linked to the fact that an overwhelming percentage of prisoners suffer mental health and/or substance abuse problems, as determined by a Bureau of Justice Statistics report that found 64 percent, 56 percent, and 45 percent of local jail prisoners, state prisoners, and federal prisoners, respectively, had some mental health problem. [14] In light of their frequent mental disabilities, tending to the unique needs of these patients requires balancing the development of functional nurse-client relationships and patient advocacy with security compliance and standard prison procedures, especially when prescribing psychotropic medications. In larger prisons that house convicts with sentences that are, on average, greater than one year, psychiatric nurses will also need to be prepared to plan and supervise long-term ongoing treatment plans that may include coordinated mental health services, such as group and individual therapy or similar therapeutic activities. [18]

Military veterans are a commonly at-risk demographic, as the intensity of war can lead to extensive strain on a person’s mental condition. The most common concern for veterans returning from war are traumatic brain injuries that can reduce brain function and emotionally traumatic events that can lead to serious psychiatric issues, like post-traumatic stress disorder, depression, and suicidal tendencies. For instance, 37 percent of veterans returning from Iraq and Afghanistan were found to have a mental health diagnosis in 2009 and recent reports from the Department of Veterans Affairs have determined that an average of twenty U.S. veterans commit suicide daily. Through DNP curriculum, nurses can develop skills that allow them to work with veterans and their families to ensure that their previous service has a limited impact on their mental health.

Negative environmental factors, such as parenting or abuse, as well as genetic conditions, like mental illness, can diminish a child’s ability to function normally in society. Psychiatric nursing professionals can specialize in treating pediatric patients by prioritizing the study of child psychology, alongside care strategies that target child mental, physical, or sexual abuse, mood disorders, behavioral problems, and chronic mental disorders through specialized forms of treatment, like play therapy and family therapy. Nurses working in each of the aforementioned advanced psychiatric-mental health nursing specializations create an effective support network for communities, limiting the impact of mental illness. By completing a DNP degree program, BSN holders can acquire valuable new nursing proficiencies, such as psychiatric care strategies and executive nursing skills, which can be used to implement far-reaching psychiatric initiatives.

Health care is seeing an industry-wide demand for advanced practice nurses trained at the doctoral level due to the changing landscape, drive for improved patient outcomes, and a shortage of qualified nurses. If you’re an RN with a bachelor’s degree in nursing and ready to take your career to a higher level, the Regis College’s BSN to Doctor of Nursing Practice online program can prepare you for advanced nursing practice.